Loads of people have said what a great name Bloomin’ Nora is. I won’t describe the steps that led to me choosing that name, but will give a prize to the first person to spot the 2 linked literary references in there.

When I decided that this was “the” name I wanted, I Googled it to check that there wasn’t already a band with that name. There wasn’t, but I did find out that the original phrase was “Bleeding Nora” and this became a phrase after Lord Somethingorother walked into his kitchen to find that one of his maid servants, Nora, had just killed another servant with a cucumber and was covered in blood. Maybe I just dreamt that.

My idea to form a female beginners band was partly a kind of feminist statement, but I also had in the back of my mind that it would be a good way to make some like-minded female friends. As someone who fairly recently moved 100 miles from her home town to be with a new partner most of my friends are his, and male. Well that’s been a failure then. Oh well, at least the various band contributors are great musicians who encourage and inspire me, and are people I already know and get on well with.

Still on the lookout for any female budding musicians – get in touch if you’re interested – you can have a share of profits. And by that I mean a share of the fun, excitement, and thrill of standing up on stage with only a vague idea of what might happen. 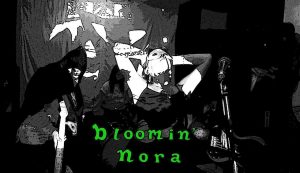